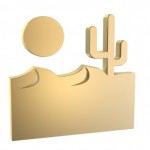 During the first week in March in 1912, only weeks after Arizona was admitted to the Union, a news item appeared in the Phoenix Paper, “All College women are invited to a meeting at the home of Mrs. A. W. Morrill. ” A week later 25 to 30 women came together to organize and elect officers for the College Club of Phoenix. These women are considered the founders of AAUW Phoenix Branch.

Between the years 1912 to 1930 the College Club met first monthly and later twice a month – the first and third Wednesday afternoons. The programs included book reports, music, art demonstrations, lectures and ended with members reading original works. Socially the year began with a garden party and ended with a picnic.

From the beginning the College Club was interested in Community affairs. Their first project was establishing a lunchroom for working women (called working girls during the period) at 225 W. Monroe. Later the College Club helped the interested women that used the lunchroom to become the YWCA of Phoenix.

The College Club gave assistance to the Phoenix library and was responsible for starting the Little Theater of Phoenix. Additionally they aided the Daughters of the American Revolution in starting the Phoenix Museum. They also worked for legislation. For example they supported a bill to establish medical examinations for public school students and to provide visiting nurses for the schools.

During WWI members of the College Club put aside most of their organizational work and worked for the war effort.

In April of 1946 through the efforts of the Phoenix Branch, the State Division of Arizona AAUW was born. Winona Montgomery from Phoenix Branch was the first state president.

In the 1950’s Phoenix Branch presented a T.V. program for children over KPHO. And later worked to activate Channel 8.

In 1961 the elementary and secondary education committee was instrumental in stimulating the state Kindergarten Association to organize. In the late 1960’s a book discussion group was formed that still meets today.

Phoenix Branch joined with Phoenix’s Family Services Dept. in 1971 to organize and broadcast GED classes on radio. During the same year we developed and broadcast ‘Survival English’ over KIFN radio station to help Hispanic women.

AAUW has worked to empower elementary and secondary school girls through projects like Girl Power and Running and Winning.

AAUW Phoenix Branch gives a yearly grant to the AAUW Educational Foundation to support education for women. For most of our history we have given scholarships to local women. The most important contribution of Phoenix Branch has been the support and the opportunity to build life-long friendships for our members.

Advancing equity for women and girls through advocacy, education, and research.